As Season 14 continues with Saturday’s ROCO Unchambered: Force of Nature, we had a chance to chat with principal flutist Brook Ferguson in this edition of ROCOInsider, to explore her inspirations in curating a program embracing the beautiful connections between music and nature.

Discover how Brook selected each work, and how the theme led to the commission of Sapien by Stephanie Ann Boyd – based on evolutionary biology!

One of the most unique aspects of our Unchambered series is that we allow our musicians to curate their own programs – what was it like putting together this program? When did the planning process start?

It is amazing that ROCO gives us these opportunities! Last year Alecia Lawyer approached me about curating an Unchambered concert for Season 14, and as soon as we started looking at music, the Crumb piece Vox Balaenae came up. That started the idea of a nature-focused theme. We also knew we wanted to include a commissioned piece, and Stephanie came to mind as a composer, with her work being often inspired by the natural world.

How did you come to know Stephanie’s work? How did the commission of Sapien take shape?

I had met Stephanie through a mutual friend and got to know her when I was looking for a composition teacher for one of my flute students who had shown a real talent for arranging and composing, Dianna Link. I wanted to find someone she could study with who was relatable, and Stephanie was a great fit, being female and also young. Dianna went on to be accepted at the University of Colorado to study composition, and Stephanie has been a huge help for her, nurturing her growth.

What I love about Stephanie’s work is her beautiful aesthetic – it’s very grounded in nature and in touch with the feminine, in the best sense. The coloring and execution, the strength and also the softness, there’s something very natural about her music. It seemed perfect for this commission.

When Stephanie and I first sat down to talk about it, it came up that my boyfriend Tom works as an evolutionary biologist, and we all later enjoyed discussing biology quite a bit over dinner. So then, I had the idea to make the piece in some sense a tip of the hat to him, and have it be actually about evolutionary biology!

I think it’s kind of beautiful to have this work that focuses on science in a humanistic way. The scope of the piece is a lot more than just humanity, it’s also about the development of the planet and life forms, showing the scope of time, of human evolution, and its context on earth.

And Crumb’s Vox Balaenae also references the scope of time – so there is some similarity.

Yes, there is – the Crumb work, which focuses on the spiritual relationship among whales through different geologic eras, also relates in that same sense to the march of time and geology.

The pieces are similar in that they are both finding ways to imagine what this is like – to represent very spiritual, very scientific ideas through music, and that’s very unique.

It’s cool to be a part of developing repertoire that captures these moments, as a snapshot of where we are in 2018, and what we understand.

From the Boyd and Crumb works, how did you choose the other two pieces to complete the program? How do they all link?

Michael Gandolfi’s Geppetto’s Workshop was next – it’s such a strong piece of music, the flute part is virtuosic, and the piano part is amazing. Michael is a good friend who I met while I was a fellow at Tanglewood Music Center, he had approached me with this piece and I was just blown away.

This piece is a looser tie-in to the theme – it’s more fantasy-oriented and fable-like, featuring several talking animals! There is a fox, a cat, and one movement is about a talking cricket, which the flute represents.

The whole sonic landscape of the movement evokes a nocturnal setting – with a 16th note ostinato in the piano that is very ambient, creating this “blanket” which symbolizes the grass full of crickets, and among all these crickets is one who stands out above the rest. Another movement is about Pinocchio’s creation from a block of wood – highlighting the intersection between fantasy and magic, a theme throughout the book.

Debussy’s Syrinx was a very natural choice to complete the program, it fits well as another musical fantasy.  In Greek mythology, Syrinx is chased by the god Pan through the reeds to the river’s edge, who is devastated by her beauty – she asks for help from the wood nymphs, and they magically transform her into the hollow reeds, which Pan then fashions a flute out of – so in a way we’re looking at the creation of the flute, through her body.

What’s also interesting about the scale Debussy uses is that it’s missing a note – a chromatic scale minus one, which is symbolic of Pan missing Syrinx. This feature is built into the music, and the lamenting and sense of loss in it is very human, very much a part of nature. It is all about the transformative power – of humans transforming into nature, and creating art.

So each piece in this program has a process which relates to the “force of nature” theme, but each takes a very different approach.

When you’re not playing with ROCO, you perform as principal flute of the Colorado Symphony, and also teach – do you have a chance to do many solo recitals or chamber performances?

A few! My life is quite full with all my current gigs, but I’ve really made it a priority this year as I have so much wonderful music I have been preparing and want to share. This will be my third concert with pianist Susan Grace this fall since September, so we’ve been on a bit of a mini-residency, and I’m hoping we will get to make a recording in the spring. I’m trying to build in more of these opportunities as I believe it keeps you on your toes as a musician, and engaged in a different way compared to playing in a large ensemble all the time.

I have had concerto performances with ROCO, the Colorado Symphony, the Los Angeles Chamber Orchestra, and I also did a very interesting concert recently with the New World Symphony chamber group of fellows – we played John Rutter’s Suite Antique, and did it conductorless! So I had a chance to lead from the orchestra, and ended up doing a bit of conducting in rehearsal, talking about communication and cuing.

I try to do a handful of meaningful solo things every season as I think it’s really important in advancing your career, and developing and evolving as an artist, to push yourself.

Any ‘bucket list’ chamber or solo pieces you wish you could perform someday?

Hmm…there’s this big piece by Pierre Boulez, Le Marteau sans maître, which has a lot of great flute in it and I have done movements of it, but never the whole thing! Also, there are many newer pieces, but which are very hard and labor-intensive to put together, and difficult to do anywhere else except academic environments or a festival.

What challenges do you find in curating your own solo or chamber programs? What do you love about it?

Building programs is something I’ve had a lot of experience doing, as I was on the artistic planning committee of the Colorado Symphony for four years, so I got really into it. For me personally, since I play Beethoven, Mozart, Brahms, Strauss, all the great classical composers on an almost weekly basis – I feel that when I have the opportunity to break free and do my own thing, I want to try something a bit different.

So therefore, my recital programming is probably a lot more adventurous than it would be if I didn’t play in an orchestra and do the classics every day. Ironic!

I think it can really go either way in solo programming: musicians may want to only stick to what they know because it’s comfortable, or may want to bust loose and do something new.

For me, I want the challenge of doing music that is different than what I do every day – and that drives my desire to be more innovative in the repertoire that I’m choosing.

Brook Ferguson features as flutist and curator in ROCO Unchambered: Force of Nature, Saturday, December 8, 2018, 5:00 pm, at MATCH. Tickets available at roco.org, or at the door. 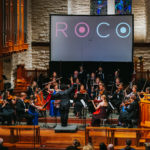