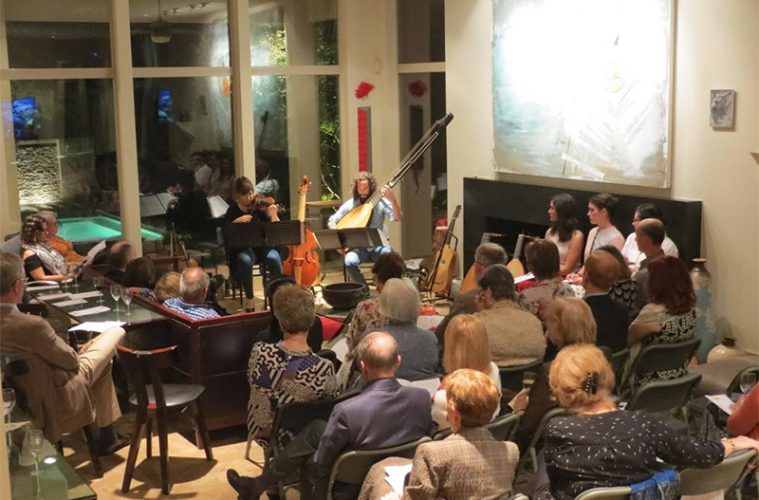 Imagine listening to Liszt in your living room. Whether it’s Mozart or Brahms or more contemporary offerings, house concerts have become so popular in Texas that you can find one happening most weekends throughout the state.

The notion of a classical house concert is as old as music itself. In fact, the idea of a public concert hall as we know it today is fairly new in the centuries-long history of western classical music. But starting as far back as the 1990s, there was a push in the modern classical music industry to look for “new and unusual” venues. It turns out that the newest and apparently most unusual of concert spaces aren’t new or unusual at all; they’re private homes.When Jason Herbst purchased his home in Houston’s Memorial neighborhood, producing a regular series of classical house concerts wasn’t necessarily at the forefront of his mind, but he says that one of the things that attracted him was that he knew it would be a great place to entertain. An amateur musician since the age of 10, Herbst has always preferred more intimate music experiences. 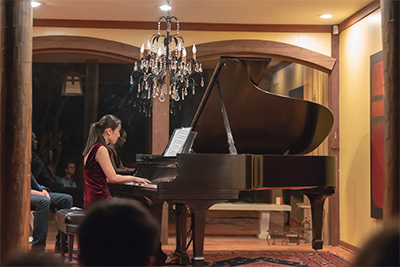 “I wanted to create a place where artists would want to come, play, and maybe also hang out,” says Herbst. “It’s an experience I ultimately wanted to deliver to others.”

Herbst is now entering his third year of presenting Memorial Classical Music Series, a regular schedule of concerts offered primarily in his home, drawing on mostly local talent. He joins a growing movement of music lovers in Texas and around the country seeking out more personalized concert experiences. Like most at-home events, they usually feature food and drinks, and even sometimes a potluck. Most often, these events are a labor of love for performers and presenters alike. Herbst spends a good deal of time seeking out performers for his series.

House concerts come in all shapes and sizes, and sometimes, it’s about the house as upscale digs can provide a dramatic setting for classical music. In 1994, the Dallas-based Orchestra of New Spain was in its fifth season when they launched concerts in iconic Dallas homes. Founder and Artistic Director Grover Wilkins recalls that it was former Board President Mary Anne Caldwell’s idea to present a concert in the French style home of George Parker, the former director of Texaco. The home featured an authentic French salon complete with wall tapestries and parquet floors. The notion of presenting French and Spanish chamber music from the Baroque era in that kind of environment was an enticing one for Wilkins.

The following year, Orchestra of New Spain offered a concert in the dramatic Philip Johnson-designed home of Henry and Patricia Beck. Built in 1964, the stately mansion in the affluent Preston Hollow neighborhood was made to entertain. After another successful performance the formula was clear: an otherwise inaccessible but special venue, wine and tapas, and a strong program of chamber music.

“It is the combination of personalities and musicians, allowed to mix in a situation that keeps the music and the people engaged in proximity to each other, the way chamber music was intended to be played,” says Wilkins, who now regularly features house concerts in his series. The house concert as a regular part of a season is already a staple in Austin as two of the area’s chamber music presenters offering regular ticketed concerts in homes. Austin Chamber Music Center offers a pair of concerts for each program on its series. The first night is in a private home, while the second performance happens in a larger public space. Salon Concerts, founded by composer and pianist Kathryn Mishell along with her late husband, violinist Robert Rudié, also presents a handful of concerts, many in private homes.

Ars Lyrica Houston recently played off the social aspects of the house concert when they held their Opera Circle Kick Off party at an elegant Museum District mansion. The party culminated in Aryeh Nussbaum Cohen’s performance of an aria from Handel’s Agrippina, the very opera that the Opera Circle help fund. The event served a double purpose launching the initiative in a fun experience and generating excitement for Agrippina.

You do not need to be an organization to offer a show. Sometimes you want to hear great music by great musicians closer to home. John Epstein, donor and a friend of violinist Natalie Lin and her Houston string orchestra, KINETIC Ensemble, produced a single concert in his Museum District high-rise’s party room. The ensemble had prepared Beethoven’s String Quartet Op. 74, for Da Camera’s “Beethoven for All” series. After working many hours preparing the piece for a single concert, they were looking for a second performance. Epstein offered the young ensemble a chance to play the string quartet again for friends and neighbors in an elegant public room in his building. There was no admission fee or suggested donation. Instead, he financed the musicians himself and also supplied food and drinks for his guests. “The point was that the ensemble had only one opportunity to perform this gigantic piece, and I was happy to invite them to perform it again, and offer them a stipend for their efforts,” says Epstein.

For musicians, the house concert can fill a much needed gap in performing and touring. Mark Landson founded the Dallas-based Open Classical, known for its Open Mic Nights and house concerts. Landson, an Eastman School of Music alum, has spent the majority of his adult life trying to figure out how to bring classical music lovers more directly into contact with the artists who create music. After a year touring with a punk band, he noticed that while there was a well-defined route for non-classical musicians to succeed, there weren’t the same opportunities for classical musicians.

“Classical music needs a mid-level touring route where entrepreneurial musicians can test out their ideas in an open space and build an audience for themselves,” says Landson.

Violinist Dominika Dancewicz performs chamber music as a member of both Axiom Quartet and, along with pianist Donald Doucet, as the Dancewicz-Doucet Duo. She says that the first house concert in which she performed was back in the 1990s in her native Poland. Dancewicz and her ensembles are actively seeking out such performance opportunities these days. Her duo has been presented by Jason Herbst on Houston’s Memorial Classical Music Series as well as by Mark Landson as part of Open Classical in Dallas.

“We have experienced rowdy crowds, whistling and cheering as we play our rock or pop arrangements,” says Dancewicz. “And we’ve also been part of quiet, focused gatherings where people are absorbing each note in silence. It’s so rewarding because we get to do what we do best on a very intimate level, where we can talk to the listeners directly and offer them something special,” Ingrid Capparelli Gerling, a violinist in Axiom Quartet, agrees that it’s the direct connection between performer and listener that is at the heart of all great musical experiences, regardless of the venue, adding, “If you have a good connection, then it is a great experience for everyone,” says Gerling, who is a regular on the house concert circuit.

House concerts also make great opportunities for musicians to try things out. Pianist and music writer Sherry Cheng recently did that for Giancarlo Latta and Robert Fleitz, who were preparing for an upcoming tour. “Giancarlo and Robert are taking this show of all new music on tour to Florida, Michigan, and NYC,” says Cheng, who recently performed as part of Herbst’s series. “This was their chance for a run-through with a friendly but knowledgeable audience who can give them some feedback. Giancarlo’s teacher Paul Kantor (Rice University) came. It was the first time he got to hear the program because Robert lives in NYC and was only in town for a few days. The duo also needed to break in Houston composer and Da Camera Young Artist Theo Chandler’s new work “Reflected Arc” among other contemporary works. Mr. Chandler was also in the audience. This piece was a world premiere.”

Keep in mind that a house is not a concert hall. Andreea Mut, the pianist in the Gerling-Mut Duo, found that out first hand when she performed on a program for the San Antonio-based Classical Music Institute’s Salon Séance in San Antonio. In a whirl of excitement amidst a flourish of notes, she accidentally smacked her partner’s violin mid-performance. “It was cramped,” Mut recalls. “There was virtually no empty space between the chairs of the performers and the audience.” Sometimes, a house can indeed contain a concert hall. North of Houston, in The Woodlands, Scott Cutler has been producing a notable series of concerts in his home on the banks of Lake Woodlands for a number of years. When designing his then new home he had his architect create a dedicated music room with floor-to-ceiling views of the lake. In the intervening years he’s welcomed notable musicians from both the Houston Symphony and from the faculty of Rice University to perform, and although his series is taking this year off while his home is being renovated, they have presented a total of one hundred concerts. While he does have a mailing list, he doesn’t do any kind of formal advertising. “It’s basically word of mouth,” says Cutler. “We sell out so rapidly that there’s really no need to do any advertising.”

House concerts are not without challenges, whether it’s releasing the actual address or the potential awkwardness of welcoming complete strangers into your home. Herbst once noticed a patron that he worried was just a little too taken with his home; the person seemed to linger around taking perhaps one too many photos. It hasn’t stopped him though. “The only thing I have of any real value in the house is the piano,” quips Herbst.

Then there’s the money part, which varies from show to show. Memorial Classical Music Series follows a model similar to the Groupmuse, the app for House concerts. There is a suggested donation and all of the money, no matter how much or how little is collected, goes to the musicians. Wilkins and his Orchestra of New Spain follow a different model. They offer musicians a set fee and charge a fixed admission price for attendees, which is consistent with the more formal venues and well-heeled audience. Sometimes, the door doesn’t bring in enough cash and the presenter may need to subsidize the stipend. And let’s not forget your neighbors. It’s a good idea to inform them about the event and invite them! And one needs to remember for that night, your house is in fact a concert hall and the safety of your audience is important.

Building communities and audiences is a common theme for both organizations and individuals who present house concerts, but what makes these events special for performers and listeners alike is the direct connection with each other. It can be as simple as friends celebrating music together. Before Aperio: Music of the Americas launched its Houston season, artistic director Michael Zuraw held an informal gathering at his charming heights bungalow. Friends, donors and musicians gathered not only to hear great music, eat and drink, but to celebrate Zuraw’s birthday with a surprise birthday cake. Zuraw described it as a hybrid event and an impromptu perk to Aperio’s friends. He adds, “It’s all about creating a festive atmosphere in which a love of music and camaraderie flows freely between dear friends and our family of performers.”